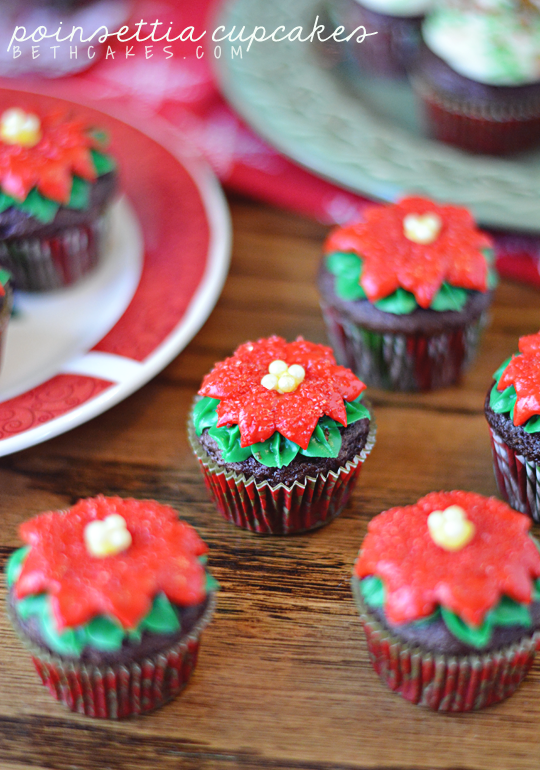 Let me tell you about my crazy week and how I had all these plans for Christmas blog posts, and then I didn’t do any of them. It’s actually been an incredible week. Like, the best one I’ve had in awhile. Last week I made these mini cupcakes for a work Christmas party on Thursday and really wanted to do a how-to on the poinsettias. (aaand I’m just now getting to them.)

Also on Thursday I was asked to be in some how-to videos at work! They’re “hands only” how-to videos (thank goodness!), mostly cakes, cupcakes, and baked goods. All Easter and Valentine’s things! I got a super fancy manicure and everything. Probably the best thing that I’ve done at my internship so far. Seriously, such an awesome experience! (If you follow me on Instagram you probably got tired of it, but I was really excited. #sorryimnotsorry)

So that was Monday and Tuesday, then my car wouldn’t start Wednesday morning, spent wayyy too much time at the car place Wednesday night, visited with some family that flew in from New Jersey last night, and now it’s Friday. It’s been crazy and wonderful, and it’s almost Christmas and I only have one festive recipe posted. 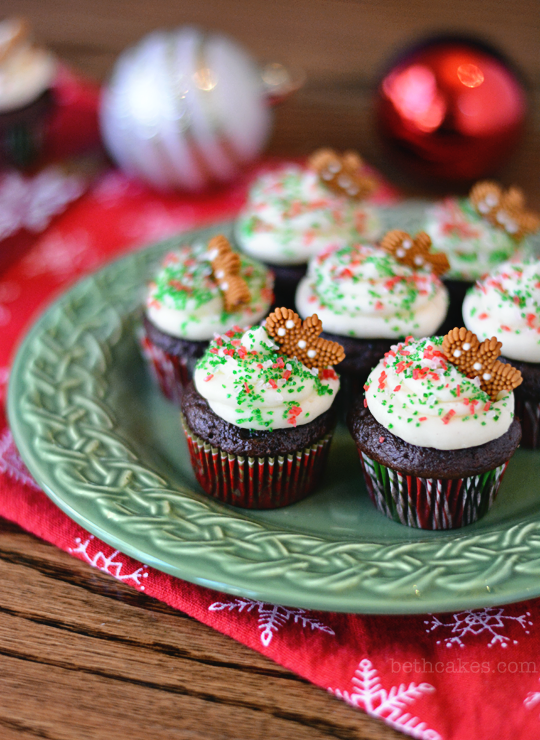 There are a lot of sweets around this time of the year, so I went with mini cupcakes instead of standard. If there are a lot of sweets on the dessert table at your family Christmas party, it’s easier to try a little of everything when they’re smaller portions. I’ve definitely had that moment of “Man, this cupcake looks good, but I really don’t want to eat a whole one.” So, I think people would be more likely to go for one in mini form. Plus one batch makes a ton of cupcakes, so they’re good for large parties.

I also made the cupcakes in the photo above with the poinsettias. I don’t have any tutorials for them or anything, though. They’re just chocolate cupcakes with buttercream frosting and cute, little gingerbread guys from Michael’s.

The poinsettias are actually pretty easy! When I first thought about making them, they seemed like the kind of things that look pretty and impressive in my head, but would look like a hot mess in real life. It took me a little bit to get the petals and leaves right, and I’d also never used a leaf decorating tip before, but they turned out pretty well I think! 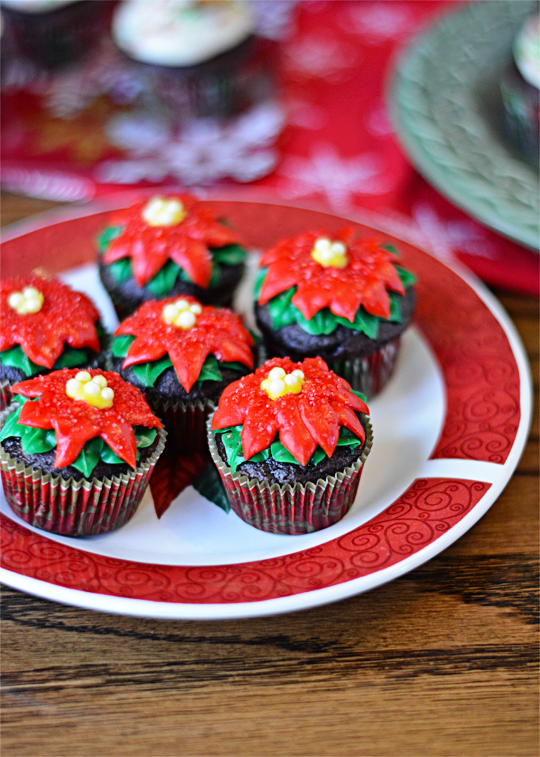 Do you see how the red petals are shiny? I used royal icing, but it totally got melty. I’m not sure why because it was perfectly fine the night I made them. I used this recipe by Alton Brown, but it’s probably something I did because I’d never made royal icing before this. But if you have a trusty royal icing recipe, you can definitely use that instead if you’d like.

Instructions:
1. First, you’re going to pipe the green leaves onto your tiny cupcakes. Attach the leaf tip to the green frosting and practice a few on a napkin. (This is also a good way to tell if the frosting is thick enough. With these store bought frostings, I’ve found that sometimes they’re too runny at first. Just pop it in the fridge for a minute and it should thicken up.) Pipe small leaves around the edges, but don’t start in the center (this helps the red petals stand up better).

2. Next pipe the red petals by starting in the center of the cupcake and moving outward. I found it easiest to pipe 4 petals, like in the picture above, and go back and add a petal between each of them.

3. Sprinkle with red sugar sprinkles to give the petals a little sparkle.

Pretty easy, right? It’s pretty easy to eat a couple of these babies, too. 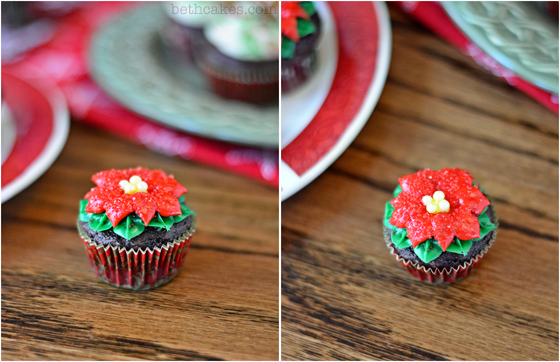 I’m about to play this game called Let’s See How Many Blog Posts I Can Write Before Christmas. Don’t worry, I’ll keep you updated. 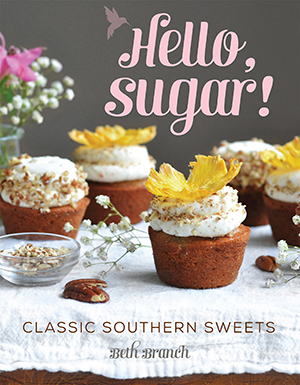