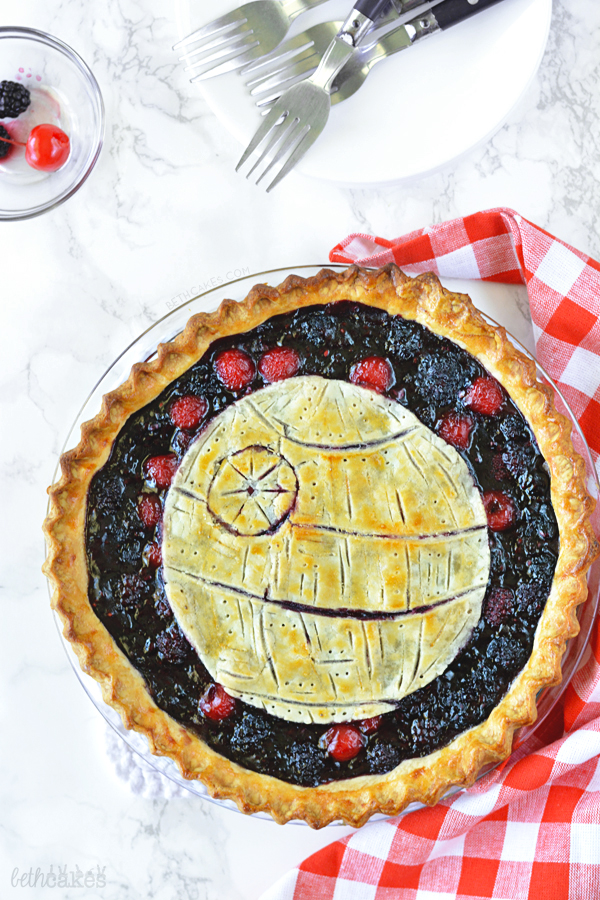 Happy Monday and May the Fourth be with you, friends. It’s Star Wars day, and since the new movie trailer was released a couple weeks ago, I figured this was the perfect time to celebrate with a pie. Especially since it’s berry season too!

I have to admit though, I used two bags of frozen blackberries and a jar of maraschino cherries for this pie. You can substitute in fresh berries, which I think you should definitely do if you’re into that. The tiny little boxes of fresh blackberries in my grocery store’s produce section were a little pricey for me, especially when I was going to need enough to fill a whole pie. I didn’t see any fresh cherries either. Maybe later in the summer I’ll make this again with the fresh stuff. 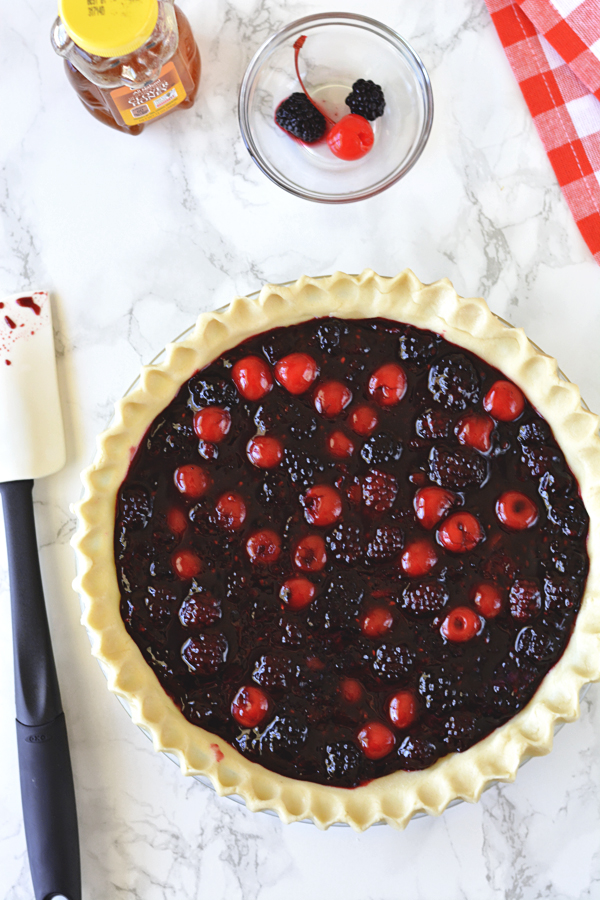 I am SO excited to be sharing this pie with you. I was pretty much a happy, little child when I was making it yesterday. I wasn’t sure how the Death Star would hold up in the oven or if the little lines and dots would turn out. Thankfully they did, and I can assure you, it was much easier to make than you might think.

You just need to cut a 6 inch circle out of some pie crust. Then use a knife to make the horizontal, slightly curved lines. Divide the horizontal rows into boxes, then add in some extra vertical lines and dots. I kind of free-handed the design while looking at a photo of the real thing on my laptop. Definitely go ahead and make a line around the eye/lens thingy. I use a small cup to make an indention, but it sort of disappeared while the pie was baking.

The trickiest part of this is making sure your knife doesn’t go all the way through the pie crust. Try to lay it on the pie all in one piece if you can. 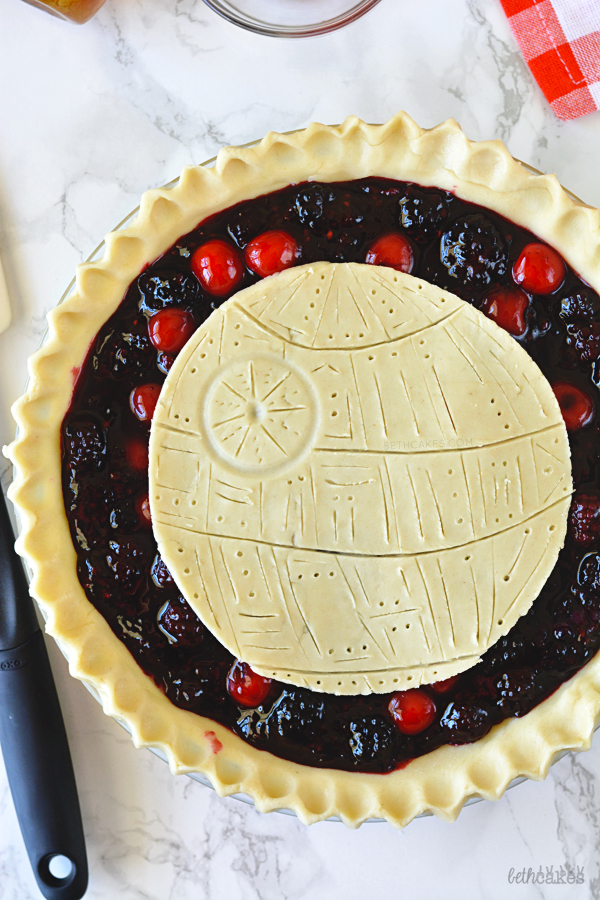 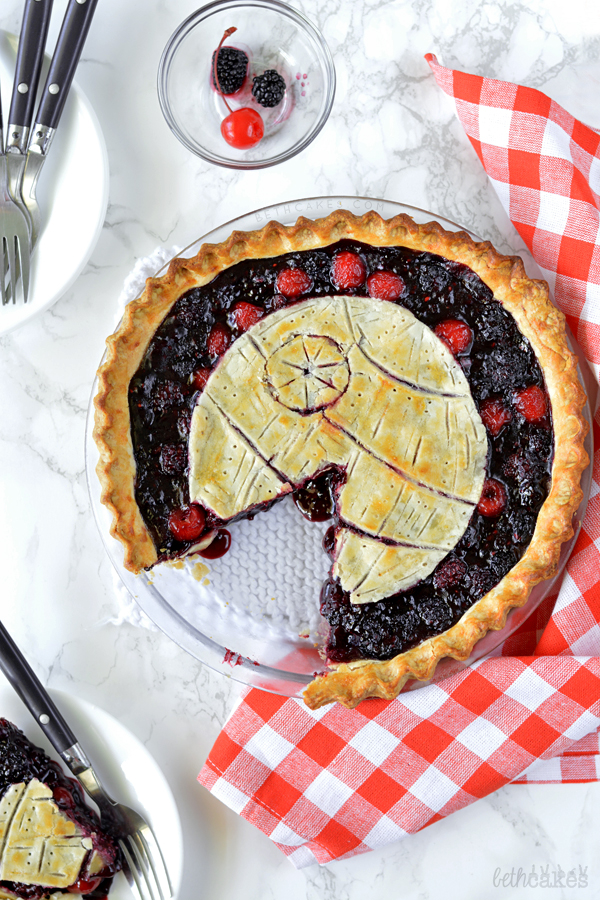 You’ll start out this pie by cooking half of the blackberries with some sugar, cornstarch, and vanilla bean seeds. Then all of that will cook until you have a jelly-like substance. The rest of the blackberries and cherries are folded into the mixture, which will help your pie filling keep its shape when you cut out a slice.

May the Force be with you today, friends! 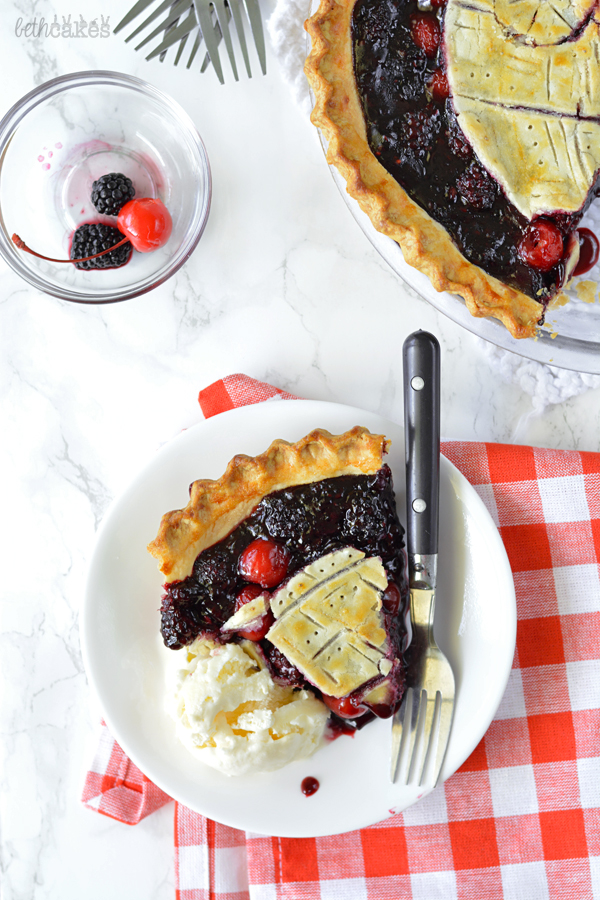 Print
Ingredients
Instructions
Notes
Recipe from bethcakes. All images and content are copyright protected. Please do not use my images without permission. If you would like to republish this recipe, please re-write the recipe in your own words, or link back to this post for the recipe. Thank you.
3.3.3070
Tweet
Pin401
Share25
426 Shares