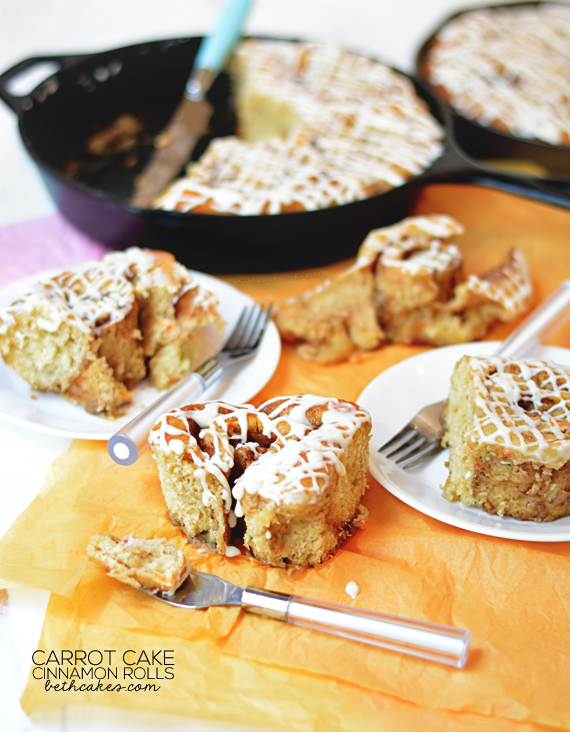 Trying to squeeze in one more Easter-ish treat before Sunday!

Not going to lie, I was pretty convinced at one point during the cinnamon-roll-making-process that these were 100% a fail. And then they did fail. I had this moment where I thought, “Do I really want to make these again?” Then I sighed and thought…Yeahhh. I was really dreading repeating the whole process of mixing up the dough, letting it rise, rolling it out, cutting it into slices, letting it rise again, and then baking them.

That’s a lot of steps, you know? 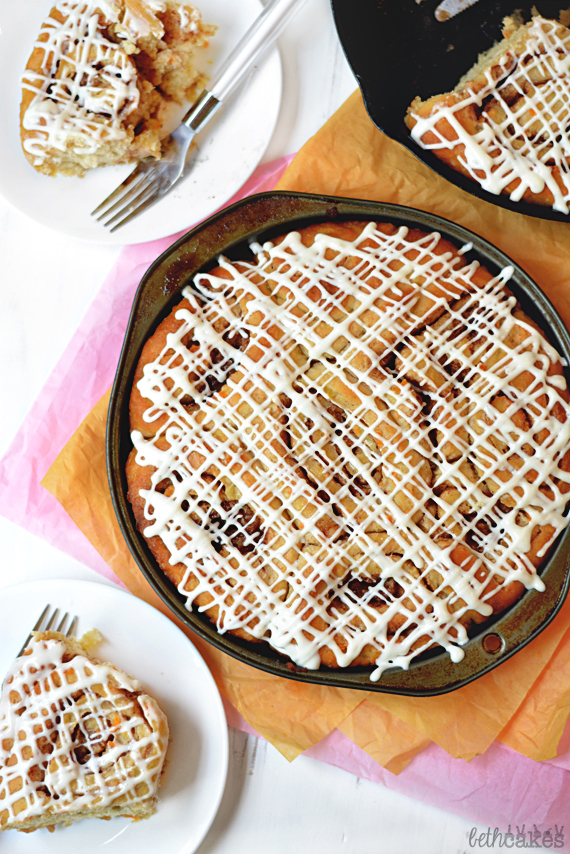 But the biggest thing that was holding me back?

This is the first time I’ve ever made homemade cinnamon rolls! Sometimes things work out the first time you make them, but I figured that probably wouldn’t be the case with these. I just haven’t made many homemade breads and pastries, and honestly, they intimidate me a little bit.

The first time I made these and they failed, it was totally my fault because I tried to do a shortcut when I was running out of time one morning. Which happens to me a lot, actually. Ha. I’m really glad I gave these another shot, though. They turned out really well when I followed the rules. 😉 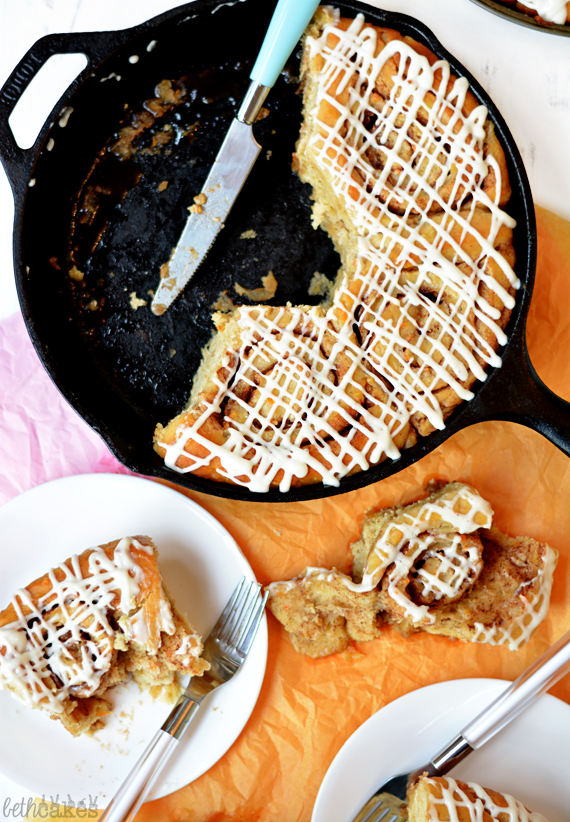 I feel like I have to be honest with you about something else too.

I don’t like veggies in my baked goods! I just don’t. I don’t like zucchini in them or rhubarb, or any of the other vegetables that show up in cakes and quick breads. But if you have been following this blog for any length of time, you also know that I don’t like chunks of things in baked goods either. I seriously tried to chop these carrots as small as I could, and after baking the rolls, they really aren’t that noticeable. They’re there, but it isn’t like you take a bite and end up with a mouth full of carrots.

But if you’re a carrot cake fan and you don’t mind chunky sweets, these are totally for you! Even as someone who claims she doesn’t like carrot cake, these were really good. My parents raved about them and they can get down with some carrot cake! 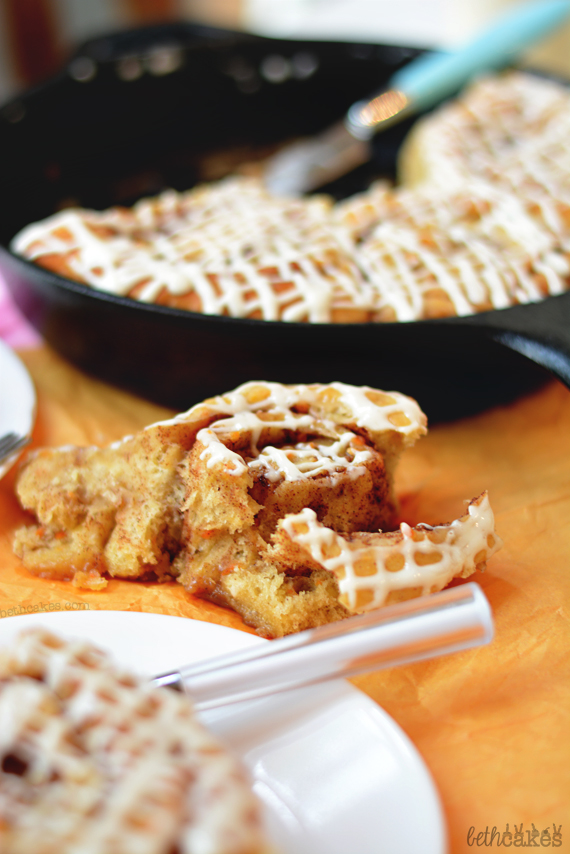 To make these cinnamon rolls carrot cake flavored, I took some classic cinnamon rolls and added shredded carrots and crushed pineapple to the dough. For some reason, I just knew adding those two things would mess up the whole process. Just knew it. But I was wrong!

The filling is a classic brown sugar cinnamon filling, but I think you should definitely consider adding chopped pecans if you like pecans. I tried really hard not drizzle this cream cheese glaze directly into my mouth, and you may have similar issues. But I strongly suggest you actually put it on the cinnamon rolls instead.

Sprinkling some chopped pecans and shredded coconut on top of these babies would definitely take them over the top. I had a giant bowl of toasted coconut leftover from these Bird’s Nest Cakes, and was really sad when I realized I’d forgotten about it. So definitely add those two things! 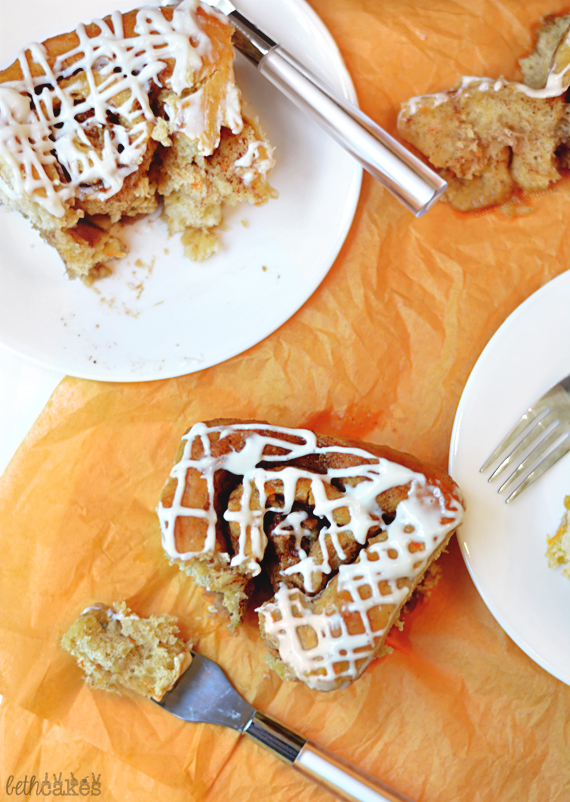 Pretty sure you have a special brunch coming up this weekend, so if you’re making cinnamon rolls, add in a few extras and bam. Carrot Cake Cinnamon Rolls.

3.1
https://bethcakes.com/carrot-cake-cinnamon-rolls/
Recipe from Bethcakes. All images and content are copyright protected. Please do not use my images without prior permission. If you want to republish this recipe, please re-write the recipe in your own words, or link back to this post for the recipe. Thank you.
Tweet
Pin625
Share22
647 Shares