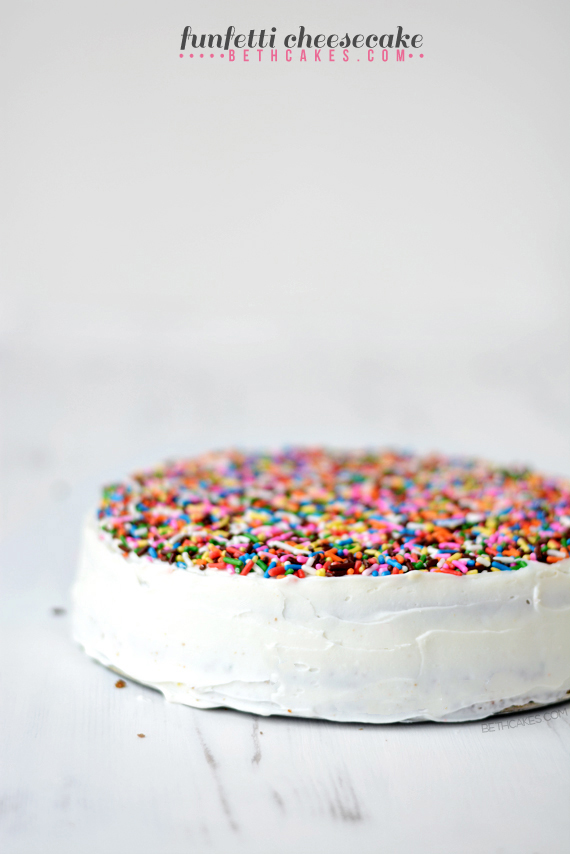 Happy Friday! I don’t know about you, but I am definitely in need of the weekend. Like real bad.

I’ve just been so restless lately and so bored with everything in my usual routine. Wake up, go to work, attempt to go to the gym, come home, and cram in as much baking, photo editing, and writing as I can. 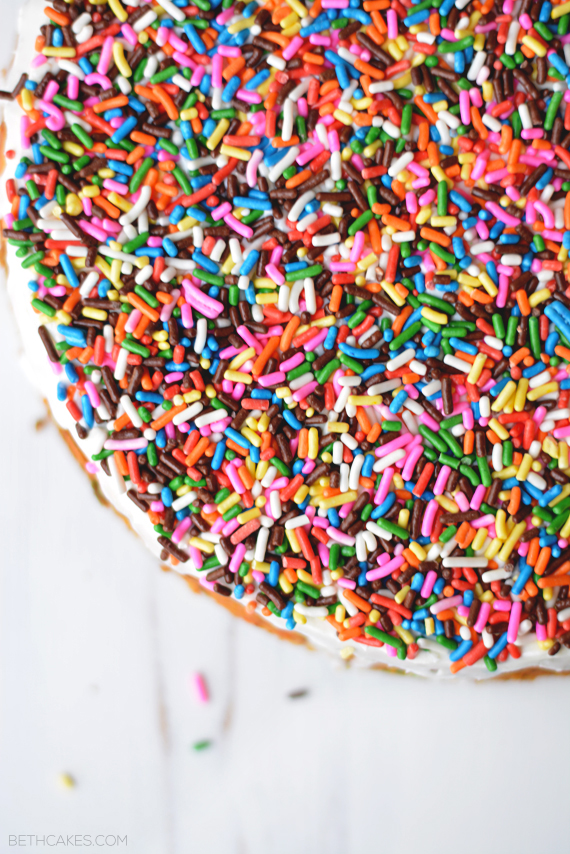 I think I’m feeling bored and unable to focus because it’s finally springtime. And it actually feels like springtime outside! How can I focus on all these things inside when everything outside finally isn’t gray and cold anymore?

Spring! It’s a miracle! Let’s celebrate with boatloads of sprinkles.

And I do mean boatloads. 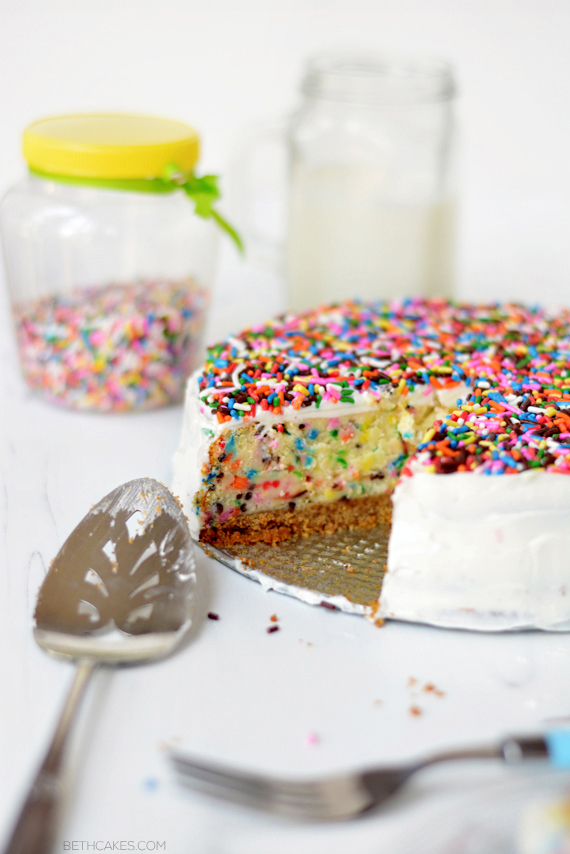 Months and months ago, I was doing this thing on Instagram (I think I may have done it like twice) where I would post a #funfettifriday photo. I got so many more likes on it than I was expecting! But I mean…it makes perfect sense. How could you not like funfetti and sprinkles?

I decided I would start doing that again, but make it a series on the blog. Right now I’m shooting for two Funfetti Friday posts a month, and I really need y’all to hold me to it because I can see myself starting this series and then completely slacking off, haha. 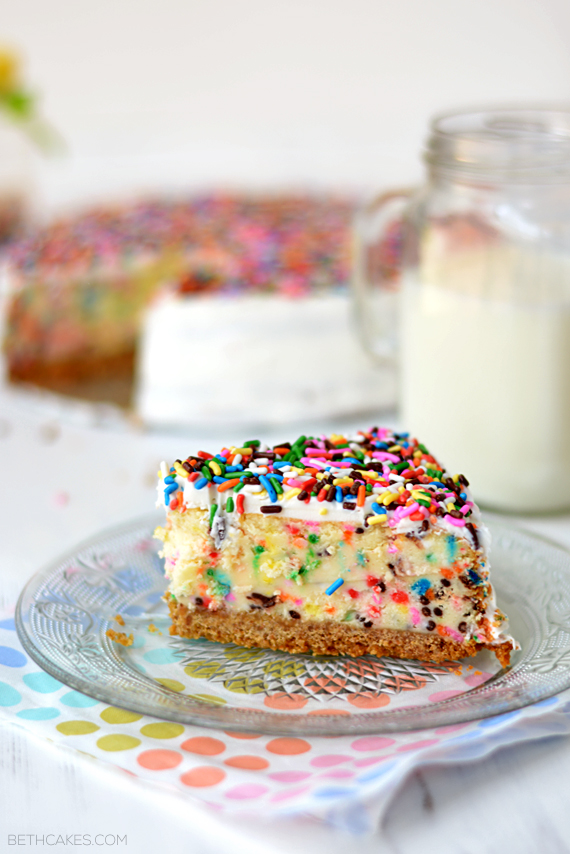 So Funfetti Friday it is!

This cheesecake might be my new favorite thing that I’ve ever made. A) It’s funfetti. B) It’s cheesecake and it’s super creamy. C) It’s also covered in frosting.

It’s everything Funfetti Friday should be. 🙂 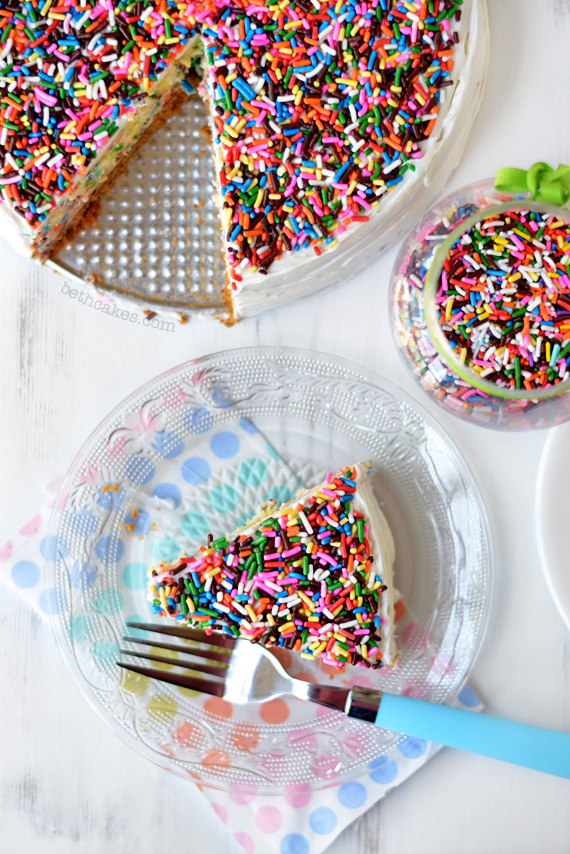 This cheesecake has a super thick graham cracker crust, which I love. And even after freezing it overnight, the cheesecake filling was fluffy and easy to cut into. So dreamy.

Funfetti usually reminds me of buttery vanilla cake, so I wanted that cheesecake texture with a little less of the cream cheese flavor. I added some extra vanilla extract and one container of vanilla Greek yogurt, and I think that really did the trick. And the yogurt also contributed to the creaminess. 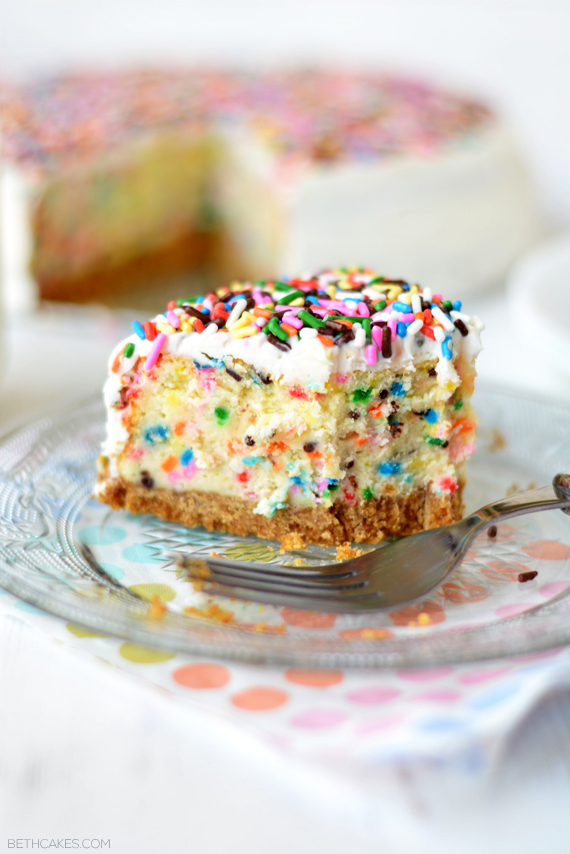 If you’re sort of still stuck in a wintery rut and need something to help you out of it, you should definitely make this cheesecake. I hope it brightens up your day! 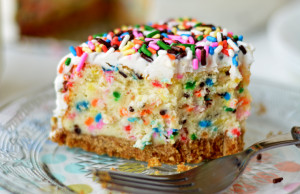