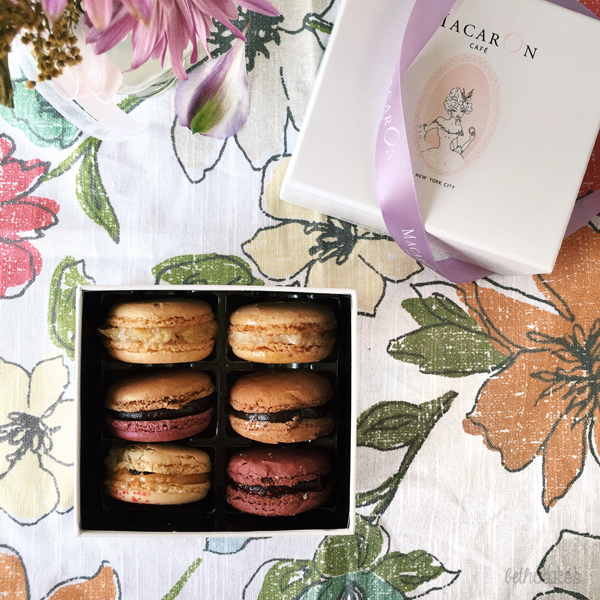 1. So last week I got these cute little macarons in the mail from Macaron Cafe in NYC. It was exciting because I was home sick from work and this little surprise showed up at my door! The flavors from top left are vanilla, coconut, chocolate raspberry, chocolate, peanut butter and jelly (!!!), and raspberry. PB&J was the best! The macarons held up surprisingly well in the mail. I don’t know if/when I’ll ever go back to New York, but I’ve totally gotta try this place out in person one day!

2. Did you watch the VMAs on Sunday? I try not to live tweet too many things, but I really love live tweeting awards shows. Especially that one–so much drama! I feel like Miley Cyrus should probably not host anything ever again though. Nicki Minaj and Taylor Swift on stage together was a nice little surprise. I don’t think I will ever understand Kanye West. And I totally adore Tori Kelly. She’s probably one of 3 people who didn’t lip sync and still sounded incredible. I wish I could get my hair to look like hers!

3. I am so excited for FOOTBALL and TAILGATING FOOD !!! Might be posting some savory recipes this year. Just warning you. 😉

4. Recently I got a Fitbit because I’m trying to get in shape (too much cake can be a bad thing, people 😉 ), and I was really excited about it because, although I work at a desk all day, I was pretty sure I move around a decent amount doing office-y things. Also, my office building is on a cul-de-sac, and my co-workers and I get up and walk up and down our street a couple times a day. I did really well the first weekend I had my Fitbit, but guess about how many steps I have by the time I leave work at 5pm? 3,000. Maxing out at three thousand, guys.

5. My friend and I write for a website called literallydarling.com, and we were able to get media passes to Dragon Con in Atlanta this weekend. I’ve mentioned a couples time before that I’m actually a giant nerd, so I’m like really excited but have no idea what to expect.

6. We had an awesome photography workshop a couple of weekends ago for Birmingham Bloggers, and I experimented a little with shooting in RAW. I was super pumped about the photos I took, sat down to edit them in Photoshop, aaaaand Photoshop will not open them. Cool.

I’ve got one more recipe for this week coming at you on Friday, but after that I hope everyone has a great Labor Day weekend!